On Thursday 26 February 2015 I gave birth to my beautiful daughter Aria Sylvie, she was five days overdue and a tiny 5lbs 11.5oz. I had imagined several different scenarios of what may happen when I went into labour, an unplanned homebirth wasn’t one of those.
I went for a sweep on the Wednesday afternoon and was told that I was only 1cm dilated and my cervix wasn’t very favourable. I was booked in for another sweep on Monday, following which they would book me in for induction because there was very slim chance of the sweeps working.
I felt ill most of the day following my sweep which then turned into contractions in the evening, I started timing them at around 1am, they were lasting around 1 minute and coming every 3-5 minutes. I called the hospital who said to wait until they were more regular, ie, every 3 minutes, or call back 1 hour later. I called an hour later, the contractions were still between 3-5 mins but I was in pain and nervous what with being a first time mother, they reluctantly agreed to me going in.
We arrived at the hospital at approximately 3am. On examination nothing had changed since my sweep earlier in the day, I was still only 1cm dilated and my cervix not favourable. The hospital Midwife performed a further sweep and we were told to go home, have a warm bath and take paracetamol to ease the pain. I should call back either when things became unbearable, I lost my waters or started to bleed, the contractions could last for up to 48 hours and may even subside.
We got home at about 4:30am, I had a warm bath and then attempted to get some sleep. The pain was still bad but my waters hadn’t broke or I hadn’t lost any blood so I stayed away from Hospital and had another bath at around 10am and stayed in the bath for what felt like hours, constantly topping it up with warm water. The pain was getting too much so Spencer rang hospital, they said to come in despite not being overly happy as there was still no blood loss and my waters hadn’t broke. Practically as soon as Spencer hung up I went from irregular contractions to the need to push! I felt as if I couldn’t make it to hospital so Spencer called back, again they asked him to check if there was any show, he had a look (I was still in the bath at this point) and there was, they told him to hang up and phone 999 immediately.
The 999 operator talked him through things on the phone and made him drain the water from the bath, I was stuck in an empty bath soaking wet, freezing cold and pushing! Rapid response turned up very quickly, he had gas & air so I instantly fell in love with him! Two midwives and a support worker arrived shortly after and moved me from the bath to the living room where they had made up a bed using the sofas cushions covered in towels, plastic sheets, etc.
1 hour 20 mins later Aria was here! Labour was straightforward I didn’t tear so had no need for stitches. I was in a little bit of pain afterwards and for the next few days but nothing too much. We had skin to skin straight away (during which Aria decided to take a dump all over me!), Spencer cut the cord once it had finished pulsing. We attempted self latching but weren’t successful.

A midwife and the support worker stayed for a little while after the birth, they bathed me, dressed me, put our towels in the washing machine for us and made sure that Aria was feeding.There was no need for us to go to hospital at all. There was an ambulance outside on stand by the whole time but they were discharged.

The rapid response guy made a joke about how much he loves when Midwives give people a sweep when they’re in pain and send them home. It sounds as if unplanned home births may be quite common!

Despite the shock of the unplanned home birth I actually really enjoyed it. The care received from the community Midwives was absolutely fantastic. People often comment about how in Hospital you are just another ‘sausage in a factory’, this was not the case at all with the Community Midwives, they were very enthusiastic, supportive and caring. 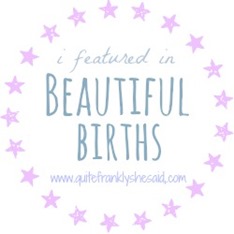 On Becoming a ‘School’ Mum

This site uses Akismet to reduce spam. Learn how your comment data is processed.